Homer, Alaska is “…like that star of the waning summer who beyond all stars rises bathed in the ocean stream to glitter in brilliance.” While the Greek Homer, who wrote that line in The Iliad, was actually talking about a shield and helmet, I felt he’d perfectly described the radiant beauty that is a small town seated on the southwest side of the Kenai Peninsula. Homer is a quirky artsy fishing village with a shoreline carved by Kachemak Bay where everyone wears rubber boots and drinks coffee (organic & fair trade only). doudoune moncler pas cher Needless to say, we fit right in.

I’m not kidding about the boots. puma chaussure 2018 I wore rubber boots into the bank in downtown Homer and no one batted an eye. From walking along the Homer Spit, which is a nifty 4.5 mile strip of land extending from Homer’s shores out into Kachemak Bay, to bike rides on the back roads with staggering views of aquamarine glaciers, snow-capped mountains, and the bay waters: there was absolutely nothing about Homer that I didn’t love madly and truly. timberland soldes real apple iphone 7 case 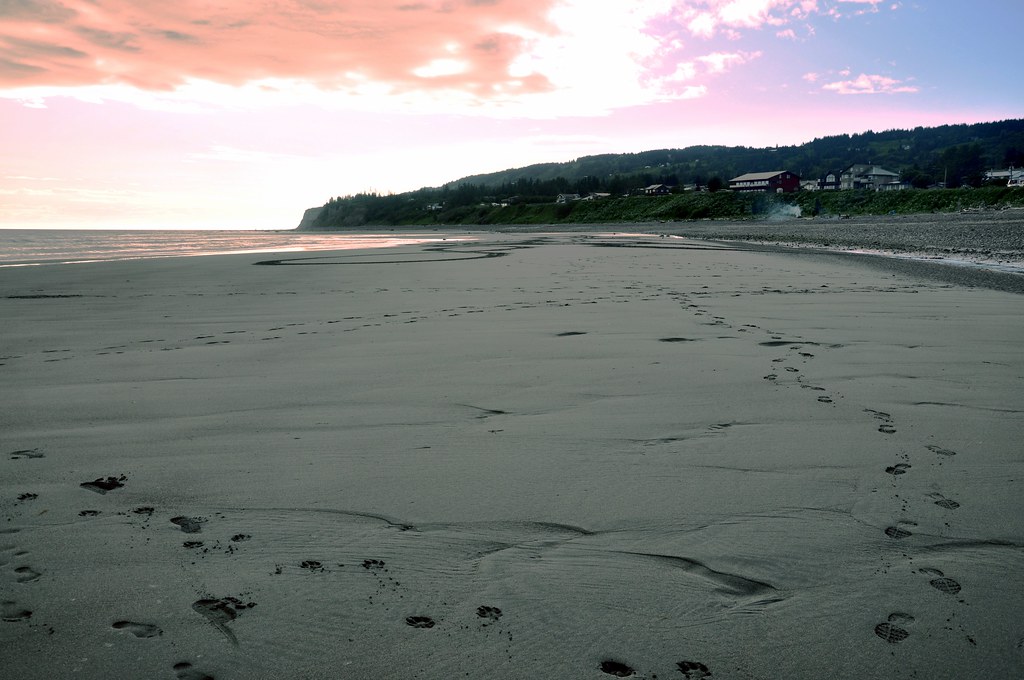 In the summer of 2013, we spent two glorious weeks at my aunt’s house overlooking the bay. It was well-worth the 14 hours of driving from our house in Fairbanks with our 20 month old son and geriatric Golden Retriever. chaussures puma iphone 7 cases red From the moment we passed out of Anchorage on Seward Highway with the Cook Inlet’s Turnagin Arm mudflats on our right, roads to Whittier up ahead, and the Chugach mountains above us, a quiet joy filled the cab of our truck and it lasted for the remainder of the trip as Seward Highway became Sterling Highway. As we rounded the bend and popped over the hill into Homer, the sky opened up with a view of Kachemak Bay and Kenai Mountains. ugg pas cher femme The town itself is largely made up of northwest-style houses (ranch with large windows and rarely shutters) with the occasional yurt and log home thrown in. bottes ugg pas cher When it comes to the feel of the town, think: Maine-Seattle-Portland. doudoune canada goose pas cher This is a town that decided not to become a stop for cruise ships (that particular honor went to Seward) and set restrictions on large retail stores (no store in Homer may be more than 45,000 square feet and retail developments over 15,000 square feet must undergo a community impact review). nike air max 2014 Homer is where the tourists are usually fellow Alaskans who have emerged from winter ready to explore the southern Kenai peninsula’s mountains, forests, glaciers, cliffs, coves, bays, and islands in the sunshine. xqisit iphone 7 plus case After a nine month winter in Fairbanks, our little family was ready for some sunlight and happiness, too. We were not disappointed. ugg australia pas cher My aunt and uncle were still building their house, so we parked in their driveway and camped in our horse trailer. doudoune canada goose pas cher The horse trailer was a four-horse gooseneck stock trailer which had been converted into a two-horse trailer with, as the ads like to call it, a weekend package. The gooseneck area had a queen-sized bed, there was a sink, wardrobe, running water, shower, generator, and extra storage. iphone 6 cases silicone animal While there, we bought a little red Zodiac which fit in the back of the horse trailer (once it was deflated & folded up) alongside our giant cooler, bag chairs, fishing supplies, folding table, bicycles, and Coleman stove. I am a huge fan of cooking on a camp stove and using the horse trailer to camp meant that I could haul along my beloved cast iron skillets. Starting the day seated in a bag chair with a plate of food resting on my knees while looking out at snow-capped mountains is pure heaven. iphone 8 plus case with side stone

After breakfast, we would haul the boat down to the Homer Spit marina and back the boat in the water. Caleb would wave to all of the fishermen and women returning from a night of hard work as we made our way through the marina and out onto the bay in our cheerful Zodiac. We were easily the smallest vessel out there but we timed things so that we were safe from the current and able to maneuver around to China Poot, Halibut Cove, Peterson Bay, Saddle Cove, and Gull Island.

Caleb, as it turned out, loved every second of boat life. We spent countless hours marveling at eagles, puffins, halibut, otters, cod, rockfish, and the picture-postcard that is the K-Bay area. When all of the lines were in the water and we were tucked in a cove, I’d open the cooler and pull out sandwiches. Caleb threw bits of bread to the gulls while Josh and I discussed our future farm or the sailing trip of our dreams. Every so often, there would be a tug on the line and we would find a fish attached, though mostly the fish would just dine on our bait. battery phone case iphone 8 We didn’t much care. Just being out on the water as a family carried our spirits. At nap time, I made a little bed for Caleb in the nose of the Zodiac with sleeping bags and extra coats. bottes timberland He would snuggle down and let the boat rock him to sleep. Goodness, he was such an easy baby!

We returned to Homer a few more times before moving to Hawaii in the fall of 2013 and we plan on going back whenever possible. We left a very large portion of our hearts in Homer and in Talkeetna, but then… that’s for me to share in other posts.

« Hike to Hamama Falls He wasn fired for what he thinks »