This small sign marks the entrance to one of the oldest known religious sites on Moloka’i and the second largest heiau in the Hawaiian Islands. Built in the 1300s as a school for kahuna, Ili’ili’opae was also a place for worshipping the god of war, Ku, and Lono, the god of peace, agriculture, and fertility. Human or animal sacrifices were usually dedicated to Ku, which means this heiau was likely the final resting place for many ancient Hawaiians. Think: Temple of Doom. It’s difficult to picture it that way though because it is possibly one of the most beautiful and peaceful places I have ever been fortunate enough to visit. 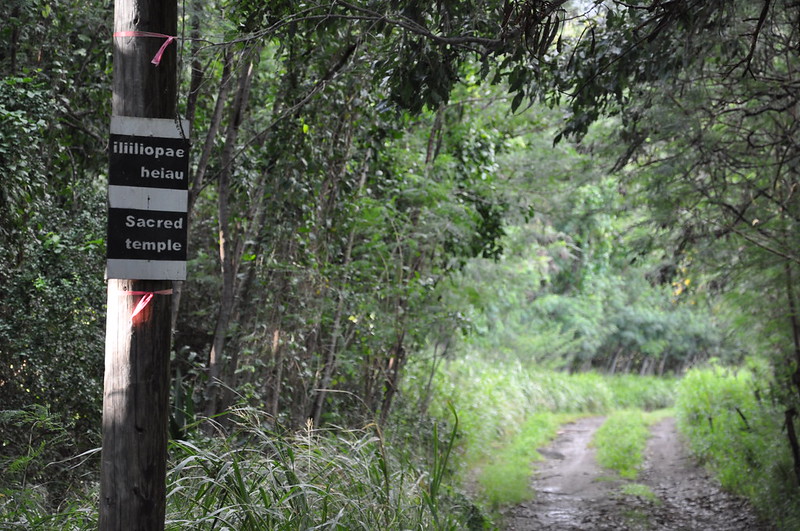 “The calm within the storm is where peace lives and breathes. It is not within perfect circumstances or a charmed life… it is not conditional. Peace is a sacred space within, it is the temple of our internal landscape. We are free to visit it, whenever we seek sanctuary. Underneath the chaos of everyday living, peace is patiently waiting our discovery… go within.” — Jaeda DeWalt

Beneath the shade of fragrant mango trees, kiawe, Java plums, a dirt road winds back to a small trail which crosses the Mapulehu Stream. Straddled by the Punaula Gulch and the Pu’Ulua Gulch, a massive rectangular field of stones (numbering over 90 million) which were said to have been placed in a single night by a line of a thousand men passing the stones hand over hand through the Wailau Valley. Mapulehu was a pu’uhonua during Molokai’s primal past. A pu’uhonua was a place of refuge where someone could go to escape death after breaking a law. Within the walls of Mepulehu, Hawaiians were granted forgiveness for their transgressions. Mapulehu was a place of peace and sanctuary just a short walk from the Ili’ili’opae Heiau. In fact, Mapulehu may be seen clearly from the heiau grounds, a tragic irony for those who paid for their crimes with their lives.

In old Hawai’i, the penalty for breaking kapu (laws) was death. If someone ate forbidden foods or set foot on land set aside for chiefs or the Ali’i, their only option for survival was to elude their pursuers and reach the nearest pu’uhonua. ‘Ai kapu, or “sacred eating,” was the set of laws which forbade women from eating with men. ‘Ai kapu also forbade women from eating or touching bananas, coconuts, pork, taro, and certain kinds of fish. ‘Ai kapu came about after the sky god, Wākea, wanted to sleep with his daughter, Hoʻohōkūkalani (her name means “to adorn the heavens with stars”). His kapuna advised him to create the ‘ai kapu in order to have time alone with his daughter, which he used to impregnate her.

According to the legend, she went on to give birth to a stillborn baby boy and her parents buried the infant on the eastern side of their home. Above the baby’s grave, a plant sprouted with large heart-shaped leaves which trembled in the wind. They called it, Hāloanakalaukapalili, and it was the first kalo plant. Hoʻohōkūkalani gave birth to a second child, Hāloa, who was the first Hawaiian person. Kalo, the root of which is called Taro, is the staple food of the Hawaiian people. Kalo, as the elder sibling, takes care of the younger sibling (Hāloa, the man) by providing food and nourishment. The younger sibling also has kuleana, or responsibility, to take care of his older sibling. As the younger sibling, Hāloa takes care of his older sibling—Hāloanakalaukapalili—by growing kalo, caring for it and the land it grows on, eating kalo, and not wasting kalo.

While respect for kalo remains, ‘ai kapu came to a hault when King Kamehameha II ended it. His father, King Kamehameha became ill and requested that there not be a sacrifice upon his death, his son honored his wishes driving the final nail in the five hundred year old kapu system coffin in May of 1819. 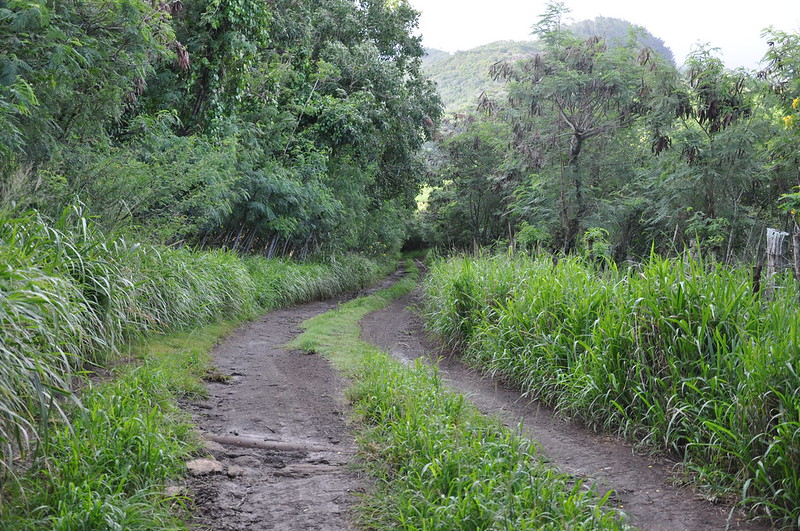 After a short journey uphill from the massive rectangle of ruins which could once be seen by canoes approaching from Maui, we found the temple.

Here, kahuna came from all over the archipelago to learn about human sacrifice and the sacred rites. Historians say the sacrificial humans were always adult men who were silently strangled (in this location… though details of ritualistic slaughtering at heiaus varied according to the rite involved*) while the priests watched calmly from their woven lauhala mats. The islanders were summoned by beating drums on the 24-27th day of the moon, the sacrificial man carried to the heiau by his relatives and neighbors, and he was then tied, strangled, and cremated. The victims of human sacrifices were considered ʻālana or mōhai—offerings—and were despatched according to strict rules. Much has changed since the last documented of Molokai’s human sacrifices in 1866, but the presence of these structures serve as a powerful adumbration of a brutal past.

Since it would soon be evening, we reluctantly turned back to our rental car in silence, our minds full with thoughts of old Hawaii and that which was sacred to us in the present. I carried Caleb on my shoulders for a while and took time to be thankful that he still wanted me to carry him. Seeing him clamber over rocks, hike for several miles without tiring, and take such interest in the history of his surroundings fills me with a mixture of pride and sorrow. While I love witnessing him mature into a tiny capable person with big ideas, I also wish I could freeze time when he falls asleep on my lap or when he wraps his golden arms around my neck, places his soft cheek to mine, and whispers, “I love you, my mommy.” How I cherish those moments! For me, the sacred temple and the sanctuary near to it serve as a reminder to take time for peaceful contemplation of the sacred special elements of our lives. Like Hawai’i, we must embrace changes, be flexible in our understandings, and evolve without forgetting or shaming our path to enlightenment, but honor our journey instead.

Many people say that the islands are haunted and that the spirits are not always friendly. I have never felt anything but joy in Hawai’i, but if I were to ever think of any spot as haunted, I’d probably consider this particular area to be an excellent candidate… especially after seeing this tree at the foot of the temple, which grew (no doubt) in the ashes of those human sacrifices washed down stream:

Any bad feelings in Hawai’i are quickly remedied by rainbows, of course. Kahalaopuna, the rainbow maiden, is my favorite of the great Hawaiian legends. She was born of the divine wind (her mother) and rain (her father) of Manoa Valley. Read her story here. It seemed fitting that she would appear as we left the heiau.

*A documented human sacrifice was conducted in 1804, when a virulent epidemic on Oahu interrupted Kamehameha’s preparations for an invasion of Kauai. To conciliate the gods, the King ordered the repairing of the Papa‘ena‘ena heiau in Waikiki and the priests called for a ten day kapu and the sacrifice of three human beings, 400 hogs, and an equal number of coconuts and hands of bananas.

An eye witness described the Papa‘ena‘ena ceremony: “When the slaughtering time arrived, one of the men was placed under the legs of the idol, and the other two were laid with the hogs and fruit upon the altar. They were then beaten with clubs upon the shoulders till they died of their blows.”

In the hono ritual that ended the dedication of a temple, the naked victim was brought already dead to the lele, or sacrificial altar. At other times, the victim would be clubbed or stabbed to death in the outer court of the hieau and then placed on the altar.

At the felling of an ʻōhiʻa for the carving of a new idol, the kahuna beheaded the victim and buried him beside the chosen tree. On setting up a newly carved image in a heiau or digging a posthole for a chief’s new house, a living victim was thrust into the hole and covered with earth.